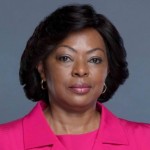 H.E Ana Afonso Dias Lourenço was born in Luanda on April 13, 1957. She holds a degree in Economics from Agostinho Neto University.

Mrs. Lourenço has a long experience in economic planning, investment programming and perspective analysis in international organizations and institutions. Mrs. Lourenço attended a postgraduate course in African Studies and Development at the Catholic University of Lisbon, Portugal.

She was Deputy-Minister of Planning and Minister of Planning from 1997 to 2012. In addition to other functions, she was a member of the Board of Directors of the World Bank Group, as Executive Director representing Angola, South Africa and Nigeria from 2012 to 2016.

Mrs. Lourenço is the First Lady of the Republic of Angola since September 2017 and the mother of three girls.

As First Lady, prioritizes initiatives aimed at improving living conditions, well-being, and capacity building for the sustainable development of communities, in the field of education, health, environment and culture, with special attention to the young girls, with the mission to contribute for Angola to be a country of which Angolans are proud, rescuing fundamental social and moral values.

We're not around right now. But you can send us an email and we'll get back to you, asap.